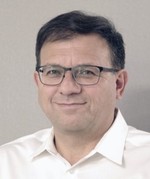 Mr. Barlev serves as our Chief Executive Officer and Secretary since January 2013 and has served as the Chairman of the Board since 2010. Previously, Mr. Barlev founded our company in 1998 and served as the Chief Executive Officer until January 2010. Mr. Barlev is a seasoned serial entrepreneur with more than 25 years of experience in high-technology leadership in military, telecommunications, e-commerce, Big Data and clean energy. Prior to joining Actelis, he was head of the R&D organization at Teledata (acquired by ADC in 1998), a global supplier of advanced digital loop carrier (DLC) equipment from 1996 to 1998. Previously, Mr. Barlev served as a senior research officer with the Israeli government, and he was also founder, Chairman/Acting CEO at companies including Superfish Inc., a leading provider of visual search technology, from 2007 to 2015; Leyden Energy, a leading supplier of breakthrough battery technology from 2010 to 2012; Adyounet Inc., provider of advanced direct marketing services over the Web from 2006 to 2009; and SafePeak LTD., provider of hot data acceleration platform for Big Data across the cloud from 2011 to 2012. Mr. Barlev holds BSC and MSEE degrees from Tel Aviv University, both Summa Cum Laude.

Dr. Niv serves as a board member in our company since 2015. Dr. Niv serves on the board of Palo Alto University and Attolight AG and is an advisor to the Silicom Ventures investment group. Dr. Niv received a BSc in chemistry and a PhD in chemical physics from Ben-Gurion University of the Negev (Israel). He completed his postdoctoral work at the University of Southern California as a Weizmann Postdoctoral Fellow.

Ms. Schmayer acted as a Senior Partner and Head of the High-tech and global corporations in one of the five largest law firms in Israel. Since then, Ms. Schmayer has been counseling companies and individuals regarding mergers & acquisitions, investments and strategy, and serves as a director of several board of directors including serving as the external director of Somoto Ltd (publicly traded on the Tel Aviv Stock Exchange under the name Nostromo Energy Ltd) and served as legal counsel for Smart Shooter Ltd. Ms. Schmayer is a renowned specialist in corporate law, corporate finance, cross-border transactions, and commercial law. Ms. Schmayer wields particular expertise in M&A, finance transactions, and complexed commercial contracts in High-tech and Biotech. Ms. Schmayer received an LLB in law from Tel Aviv University.